With the completion of the indoor season its certainly worth highlighting the successful performances of the Ferrybank AC 800m duo Callum Hurley and Jake Bagge.

This has been the most successful season in terms of 800m running for the club since Niall Tuohy’s record breaking season in 2014 where Niall won the National senior and IUAA indoor 800m titles as well as setting the Ferrybank AC record of 1.49.30 in Magghingen , Switzerland. So, let’s take a look at Callum and Jakes indoor season race by race.

The two lads set out their targets in early January to win the national Junior (Callum) and National U23's (Jake) 800m titles. The two lads certainly didn’t disappoint however they exceeded their own expectations. First up the younger of the two speedsters is Callum so let’s look at his journey to victory. 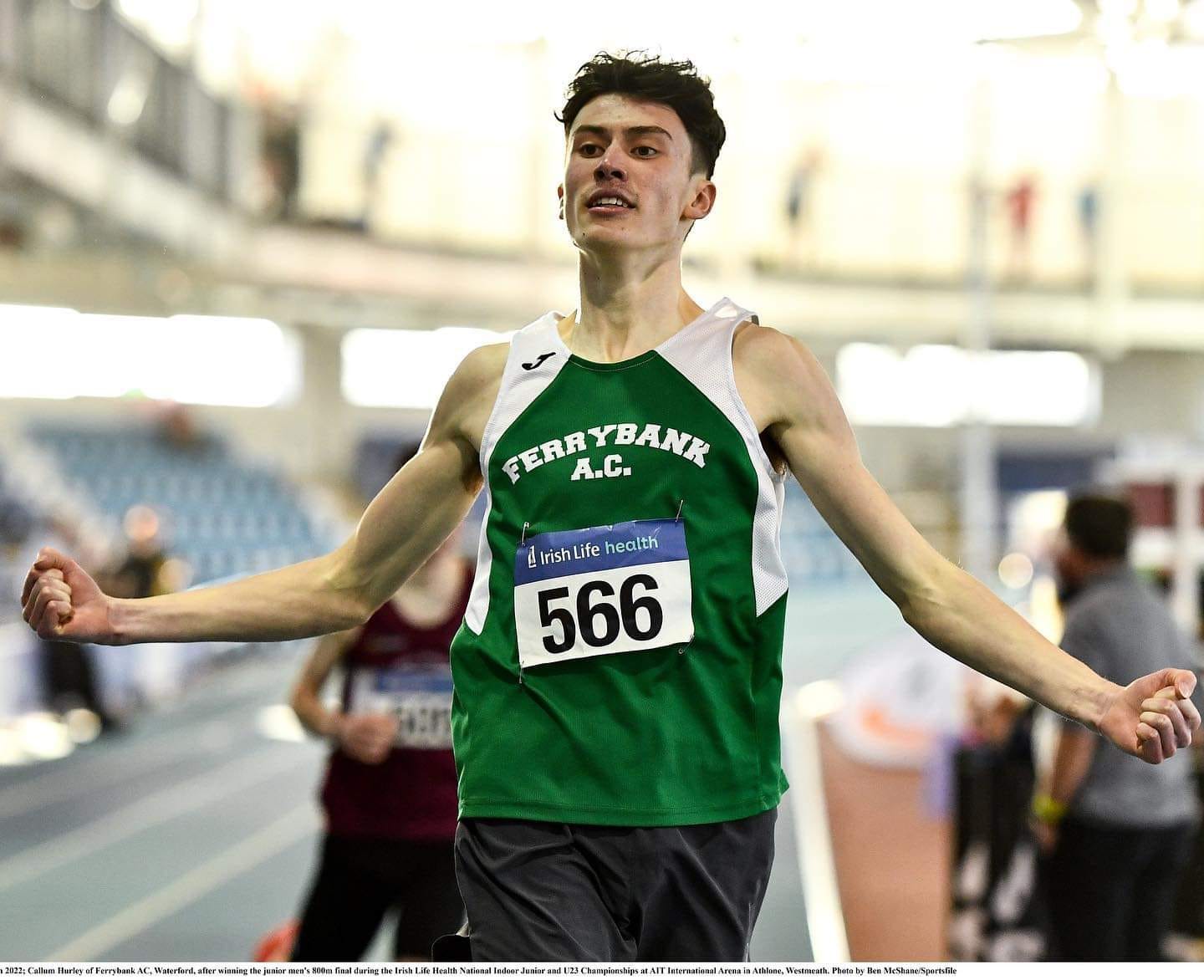 Callum possesses all the attributes you would look in a successful athlete both physically and psychologically. He is focused, humble, motivated and fearless. Callum’s winter preparation was not consistent with intermittent breaks, but despite this Callum’s ability to absorb training meant he hit the ground running in his first indoors race, such is his talent. Early signs over Christmas indicated that Callum was in decent form and when he hit the line in his first race. With an indoor PB of 2.04 Callum was sure to smash his PB.

Nenagh was the venue which is a challenge in itself but this did not sway Callum as he indicated to me before the race that he was feeling good, and he was just going to go for it. All I could say was to be careful on the first lap that you don’t overdo it. His energy and enthusiasm did not let him down Callum’s instantly took the lead and won the race leading from gun to tape in a time of 1.54.86, which smashed the previous Munster junior championship best performance held by Liam Reale since 2004. Callum won the race by 10seconds and ran a PB by 10 seconds.

Away from the cold harsh venue that is Nenagh it was on to Abbottstown Dublin for his second race of the year which was the AAI indoor games. Callum’s season best was enough to get him into the second race which was rich with quality athletes, so Callum had a big battle ahead of him. Again, Callum’s determination and fearlessness led him to smashing his PB and maintaining his unbeaten record where he won the race in a new PB in a time of 1.52.29.

Callum’s next race was the national senior indoors where he ran a PB in the 1500m clocking a time of 4.06, narrowly missing qualification for the final. Great experience and a big PB as well as a taste of senior running.

On to Athlone IT for the AAI Junior indoor champs where Callum’s goal was simple, win the gold. However, Callum had to navigate the heats earlier in the day. He eased his way into the final in a time of 2.00.68 winning the heat comfortably.

There was certainly a talented field assembled for the final so given the delicate & tactical nature of indoor racing Callum needed to be on point. He certainly was, the pace was honest from the start with Callum tucked in to second tracking the leader. With 250m to go Callum made his move and hit the bell in first position. He gained a convincing lead and held it all the way home. This was a perfectly executed tactical race by Callum showing maturity beyond his years. Before the race Callum I instructed to run through the line no matter what and he did. As if winning the race wasn’t enough Callum smashed Colin Costello’s National Junior Championship best performance clocking a new PB of 1.51.86. Callum rounded off his indoor season unbeaten over 800m and the 10th fastest Irish in 2022 man a brilliant achievement by the junior. With plenty more to come the summer will be exciting and successful no doubt.

Following on from Callum’s success Jake has been on the same journey to towards his national U23 title. Jakes self-belief and confidence has no limits. This aggressive, determined, and ambitious approach has led to his successful athletics career so far.

Jake has had a taste of international running when he represented Estonia in the Baltic games. Jake has an Estonian mother and an Irish father, and he is highly valued by the Estonia national team even more after his indoor performances. Last September Jake started college in University of Limerick this has been a big help in his development as well as linking up with Joe Ryan the vastly experienced highly regarded Irish distance coach. This partnership as well as the support of his family, training partners and environment has been Jakes key to success this year.

Jakes opening race this year was the AAI national indoor league where he ran in the guest 800m. Jake cruised home in a time 1.58.14 happy in the knowledge that he could run must faster.

The second race was a different level. The national league round 2 guest 800m was stacked with talented sub 1.50 runners and Jake was ready to take advantage of this. The blistering pace early on set up a titanic battle over the last lap and Jake was in the mix. Jake came home in a massive PB of 1.50.72 a 3 second indoor PB. Jake had now placed himself with Ireland’s elite and was ready to better this.

Jake has his indoor debut for UL in Athlone IT at the IUAA indoor champs. Jake competed in the 800m final where he had a great performance finishing 2nd in the 800m. Jake broke in UL indoor record in a time of 1.53.07 on the way to his silver medal. Jake was going from strength to strength, but the best was yet to come.

On the same day Callum Hurley nailed his 1.52 winning the B race, Jake found himself in the A race at the AAI games again mixing it with the top-class runners. Jake smashed his PB again breaking the magic 1.50 barrier. Jake finished 3rd 1.49.32 narrowly missing Niall Tuohy’s club record by 0.02 seconds. Despite narrowly missing Niall’s record, Jake became the Estonian national indoor record holder and incredible achievement.

National senior indoors took place in Abbottstown on 26th of February. Day one Jake ended up in a tough heat but cruised through to the final in a time of 1.53.49. Day two in the final Jake didn’t have his best race however he backed up his time running in 1.53.78 finishing 7th in the final. Jake now turned his attention to the U23 indoors.

National u23 championships took place in Athlone IT. Jake was ready to rock and didn’t disappoint. Jake cruised around early on in 2nd place and with 250 took the lead and never looked back. Jake rocked home to take the gold medal in a time of 1.52.45. What a day for the Ferrybank AC duo both meeting their targets and taking double gold.

The summer is going to be exciting for the group with both Callum, Jake and Andrew Connick kicking off the outdoor season and will compete over 800m at the Irish miler’s club meet on 30/04/2022 in Santry Dublin.

If you would like to sponsor Callum or Jake this would be greatly appreciated. Check out the new "Support Local Athletes through Local Business’s Initiative" in conjunction with Alfie Hale sports 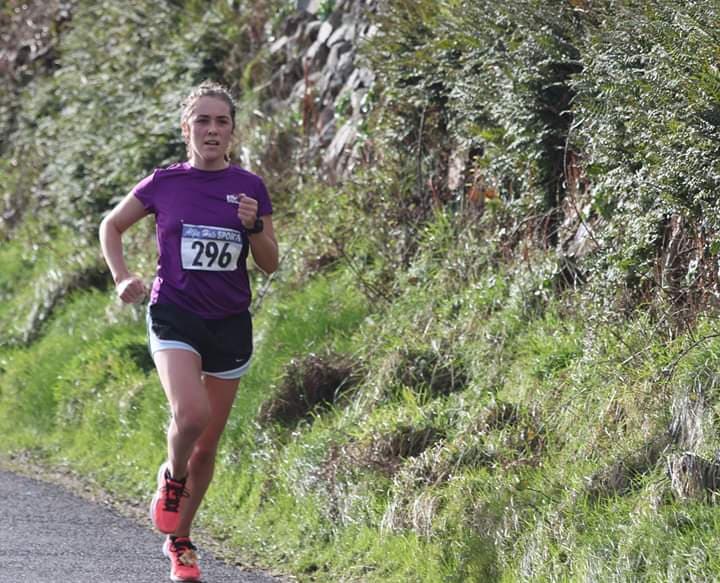